Have you ever gotten that eerie feeling that someone is watching you? Of course, right? It’s a common phenomenon. Michael Jackson even wrote a song about it:

Facebook can give you that same impression when the app displays an ad that relates to something you just discussed privately on your smartphone.

Imagine you just got off the phone with your local florist. You launch Facebook out of habit, and the first ad you see is 1800Flowers.

The most obvious explanation is that Facebook must have spied on your conversation.

So, is Facebook listening? Likely not how you think they are (via recording audio), and it’s complicated. First, let’s look at why conspiracy theories about this abound, then examine the evidence.

Research company Toluna found that Facebook is the least trusted tech company by a considerable amount. Forty percent of said they didn’t trust Facebook with their personal information.

Mark Zuckerberg has been grilled by congress on numerous occasions. They’ve blasted him for failing to curb the proliferation of fake news, not fact-checking political ads, Facebook’s Libra cryptocurrency, etc. Each time he appears in congress people the public is reminded that Zuckerberg is generally viewed with suspicion by government leaders. 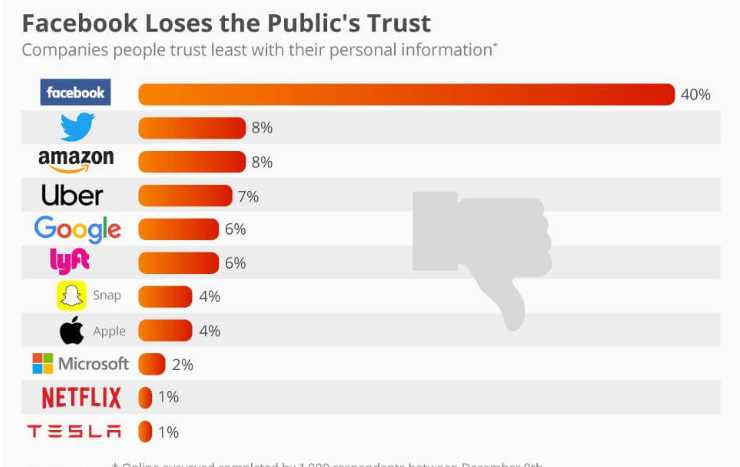 In August 2019 Bloomberg wrote a piece about Facebook contacting an external company to create software that transcribes audio conversations in their Messenger app. The transcription tech was tested on users that opted in, and the possibility of human review of conversations was part of the terms associated with using it.

To the average reader this was confirmation that Facebook is indeed spying on its users’ private conversations. Years of conspiratorial speculations rose to the surface, as this news was exactly what Facebook’s critics needed to add legitimacy to their theories.

It was Senator Gary Peters that asked Zuckerberg whether Facebook listens to conversations and then generates targeted ads with that data. Zuckerberg replied, “You’re talking about this conspiracy theory that gets passed around that we listen to what’s going on on your microphone and use that for ads. We don’t do that.”

Facebook has attempted to set the matter straight via their Newsroom. They’ve stated that ads are generated based on people’s profile information: their interests, job title, brands they follow, etc., and not what you’re talking out loud about.

Is Spying on Users Practical or Even Possible?

Despite anecdotal claims that Facebook must be listening, the data doesn’t add up.

Wandera, a mobile cyber-security company, conducted a test to determine if audio picked up with the phone’s mic influences which ads are displayed.

They put a Samsung and Apple iPhone in a room, then played an audio loop of pet food ads for 30 minutes per day, for three days. They placed another set of phones in a silent room so they could compare the results.

No pet food ads appeared on any of the phones. And more tellingly, there were no differences in data consumption, battery use, and background activity.

Experts have pointed out that it would take an incredible amount of server resources for Facebook to listen to over 150 million daily active users in the U.S. alone.

Alternatively, if Facebook were to scan audio for keywords coming into the microphone it would take a considerable amount of your phone’s CPU processing power which would be impossible to hide.

Another reason Facebook would almost certainly never even consider doing this is it’s illegal to collect audio recordings of people.

People that simply don’t trust Zuck or Facebook can use a VPN to mask their location, IP address, etc. Read about LetMeBy’s top VPN picks to learn more.

The truth is there are much more efficient and effective ways to gather data about users than harvesting audio.

Facebook has a complex algorithm that considers the information you post or input when determining which ads to show you.

It can be so stunningly accurate in determining what products or services you’re interested in you’d swear they must be listening to you. However, what really happened is the algorithm made an educated guess and managed to hit the bullseye.

There are valid reasons not to trust Facebook due to lack of privacy but spying on your conversations is not one based on the evidence.

As smartphone hardware becomes increasingly powerful, Google is equipping Android with powerful features once only found on the desktop. Hiding your IP with a VPN is a perfect example.

Although there are apps that can hide your IP for Android, you can do the same thing right within the OS. This tutorial teaches you how to utilize a VPN service to mask your IP with no additional software.

Please note that this tutorial was written using the stock version of KitKat on a Nexus phone. Android may be a bit different on your device.

Using a VPN has become the standard solution for anonymous browsing, making it next to impossible to trace activity back to your true IP.

Before you get started with exploring the settings in Android you’ll need to choose a VPN service.

I used a free provider called JustFreeVPN for testing purposes. Please note that while free services can get the job done paid options are much faster and offer superior security. Most providers offer plans under $10/month or less if you pay for the full year.

Locate “Settings” either by browsing your apps or by swiping the top menu, tapping on the user icon on the top right, then touching the cog icon.

Now that the “Settings” menu has appeared, tap on “More…” directly below “Data usage.”

In “VPN” options screen, touch the “+” icon to the right.

A box labeled ”Edit VPN profile” will appear. Give the VPN service you plan to use a name, make sure “PPTP” is selected, and then enter the server address you were provided in step 1. Check the box next to “PPP encryption (MPPE)” then tap “Save.”

Tap the VPN entry that has been created. A new box will appear allowing you to enter the username and password you got in step 1. Check the box so your info is saved for next time.

Confirm that you have successfully connected to the VPN. It should say “Connected” directly below the name you gave the server in the beginning. A tiny key icon will also appear at the top left. For additional info about the connection or to disconnect, tap the entry again.

Congrats! Your IP is now hidden on Android!